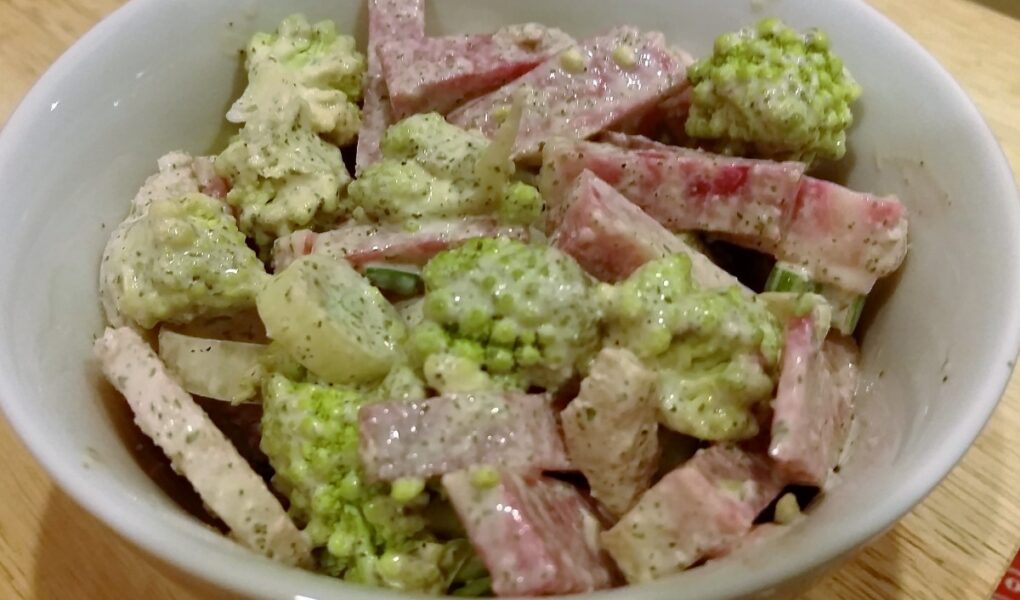 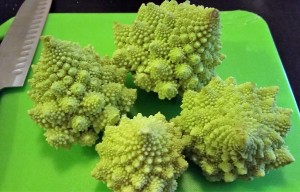 This weeks Local Fare Farm Bag brought me four small heads of Romanesco Cauliflower. This vegetable enigma is called a Romanesco Cauliflower in North America, but in Germany they call it a Romanesco Broccoli or Cabbage. It is called Romanesco because of it’s beautiful ringed, cone-shaped florets. This is a cross between broccoli and cauliflower, hence itʼs nickname, “broccaflower”. Donʼt be scared about eating this one as it is very versatile. You can eat it raw, roast it, steam it or bake it. Raw it is more like cauliflower with the same texture, but once cooked and eaten, it is clearly a cousin to broccoli. 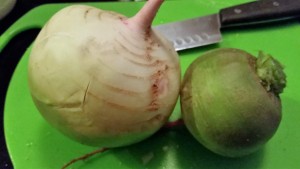 I also received a couple more large Watermelon Radishes, which are larger than your average radish. They are green and white on the outside but a rich fuchsia red on the inside and have a mild to sweet peppery flavor. The flesh of the radish is hotter toward the outside and sweeter toward the center, but never as hot as a regular radish. I am wild for these radishes, well, I love radishes in general, but even my radish despising husband loves these! Since these are both something of an oddity and have extreme colors I decided to put them together in a chop style salad! 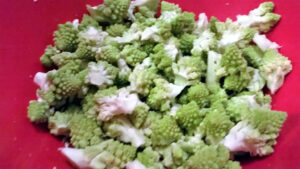 Since my heads of cauliflower were small, about the size of the largest radish, I used all four. I am a fan of chop style salads but these cauliflower are too cool – so I simply popped the cones off and chopped the last bits. Just as broccoli florets resemble little leafy trees, these resemble little fir trees. Anyway, I popped them off and filled my bowl. The extra stalk pieces I sliced and roasted with some turnip fries for our dinner. 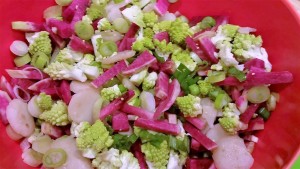 Next I sliced up a few green onions and tossed them in with the cauliflower, followed by a can of sliced water chestnuts. I just drained and tossed the contents of the can in my bowl, but I think next time I might give the water chestnuts an extra slice so that they are halves. Then I sliced up the radishes, first into thin slices and then into match sticks and tossed all the veggies together, just look at all that color and texture!! My husband thought the radishes looked like ham slices and was oddly excited by this phenomenon. 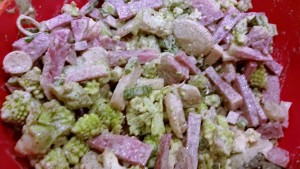 Every good salad needs a dressing and this one has one too! I tossed around between using Greek Yogurt or Mayonnaise and the fact that I am all out of yogurt was the easy deciding factor, that and I am currently avoiding dairy. (Whole other story.) I used Dukes Mayonnaise but you could easily convert this to a Vegan salad by using Veganaise. Anyway, I added lemon juice to mayo and seasoned it with two tablespoons of my Ranch Dressing seasoning I learned to make on Pinterest (2 Tbsp. dried parsley, 1 ½ tsp. dried dill weed, 2 tsp. garlic powder, 2 tsp. onion powder, 1 tsp. dried chives, 1 tsp. ground black pepper,  1 tsp. salt) but you can use the packaged Ranch Dressing mix if you choose. I just like to make my own and leave out the MSG and other additives found in packaged mixes.  I whipped this all up in my Bullet blender and tossed it with my salad. All it needed was some chill time and VIOLA!! 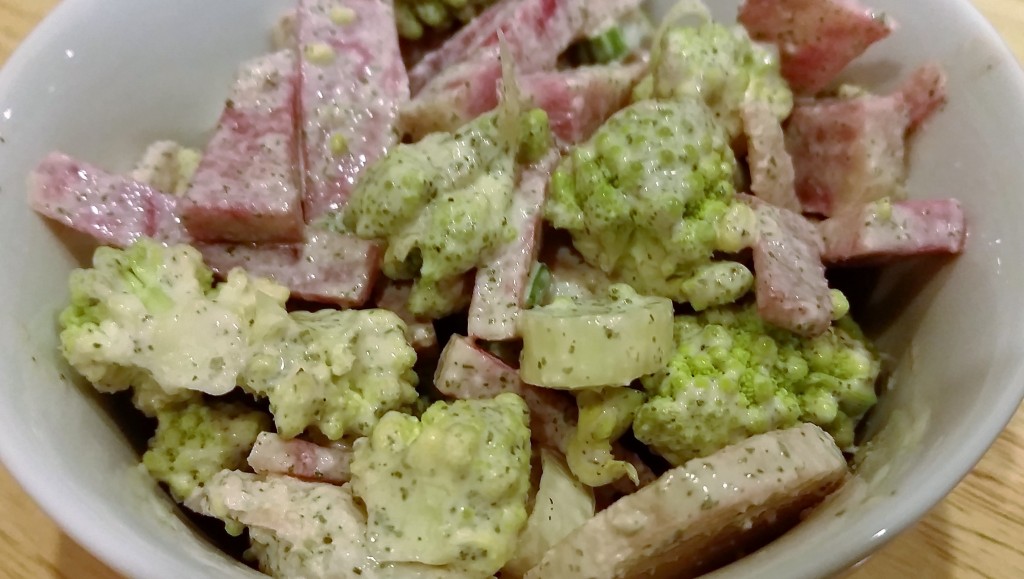 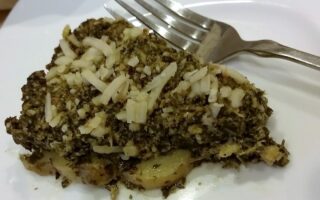 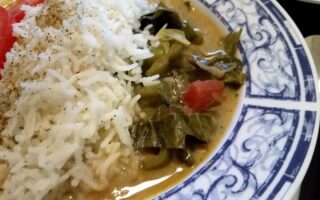 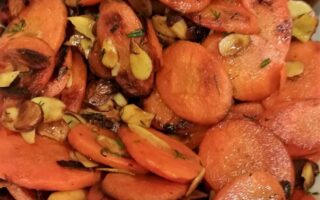