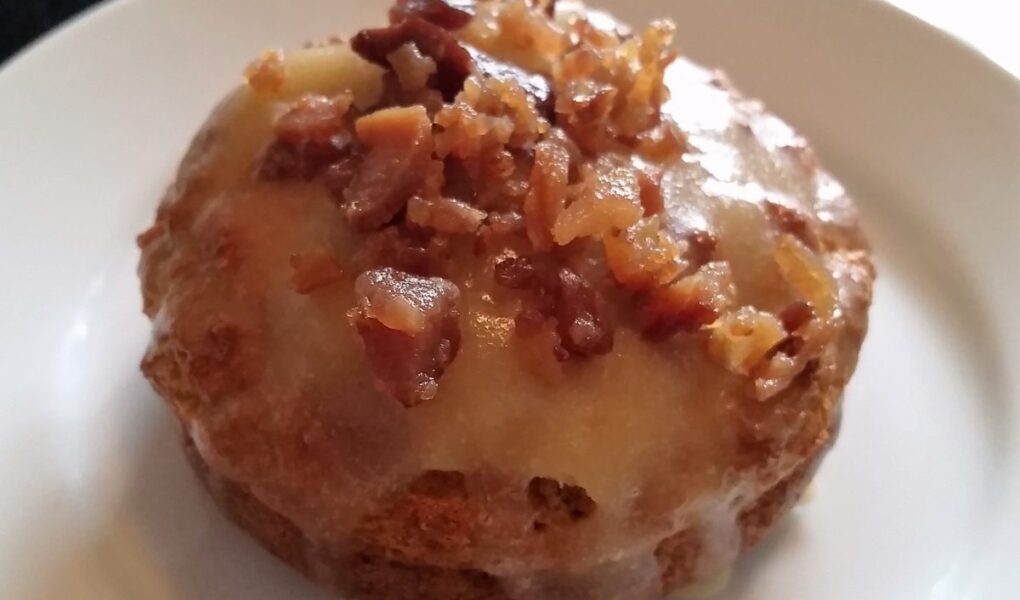 We used to frequent this lovely little Mom and Pop doughnut shop when we lived in Panama City called Leon’s Donuts on the South Tyndall Parkway just before you cross the Dupont Bridge. They have been in business for many years and it is easy to see why with one bite of any donut they make. But my favorite by far was the Maple Glazed Bacon doughnut. It was decadent. That perfect breakfasty (it’s a word!) sweet and salty bite. But those days are gone, I live in Jacksonville now and I am focused on improving my health so no more decadent doughnuts for me. Scratch that! I can make my own, but mine will be sugar free and gluten free and low carb to boot. I succeeded too, see that look on my man’s face… 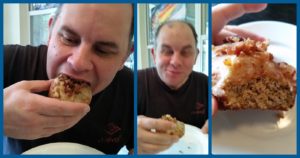 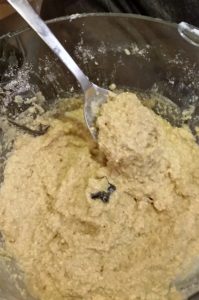 Let’s get to it then! First of all, preheat the oven to 350º F. Next whip the eggs, butter and sour cream until smooth in the processor and then sweeten with Stevia and season the egg batter with extracts, I used an equal portion of vanilla and maple flavorings. In a mixing bowl mix your dry ingredients together; flours, baking powder, salt, Cinnamon and Ginger. Once the egg slurry is whipped stir it into the dry goods to form a batter. I used a blend of flours to create my own gluten free low carb cake flour. I used one part coconut flour, one part psyllium husk powder and two parts almond flour keeping my net carbs low since the fibers were high.  Once the batter is together, walk away — let it rest for 5-10 minutes – I let it go 10, to allow the psyllium husk time to swell. This was much easier than I thought it would be and the pay off was amazing! The raw batter tasted similar to sweet maple pancakes. Yum!

Spritz a doughnut pan with coconut cooking spray. Don’t have a doughnut pan? Use a muffin pan, maple glazed bacon muffins are just as good!  Spoon you batter equally into the doughnut or muffin molds. This recipe makes enough batter for six regular sized doughnuts. 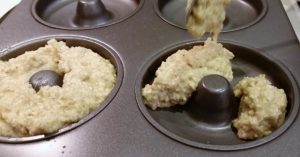 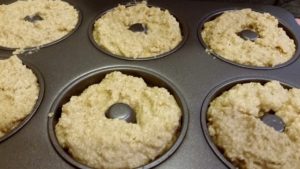 Pop the pan into the oven for twenty minutes. The baking powder will make them rise nicely. At the end of twenty minutes your doughnuts come out golden brown and delicious and fluffy too. Just pop them out onto a cooling rack. It is time to make the glaze. 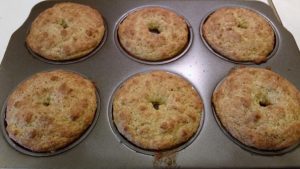 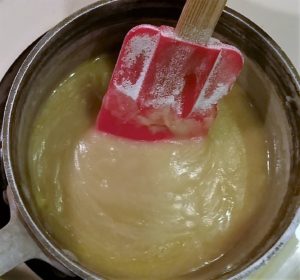 I cannot tell you how much I love the new sweetener alternative Swerve. It is made from Erythritol a sugar alcohol that does not generate an insulin response. The carbs may seem high, but the sugar alcohols zero the carbs out and you can literally do anything with it that you used to do with sugar. It has no nasty after taste, is even safe for pets and it can caramelize which is something amazing in the sugar free world. To make this outrageously delicious glaze, melt a tablespoon of butter and stir in ¾ cups of Swerve and two tablespoons of heavy Whipping Cream. Keep stirring to liquefy the Swerve. Add ¼ teaspoon Vanilla extract and a full ½ teaspoon of Maple plus a pinch of salt to balance the sweet. Once you have a creamy icing, you will need to work fast to avoid having it harden too quickly. Pour a tablespoon or two of it over each doughnut. If it hardens before you can sprinkle it with bacon, pop them in the oven to broil for a minute or so. Sprinkle with crumbled bacon, this can be freshly made crumbled bacon or bacon bits out of a bag – just make sure they are zero carb real bits of bacon. 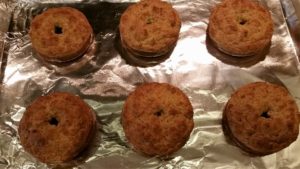 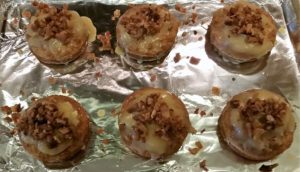 The end result is this light, fluffy flavorful cake doughnut covered in maple bacon goodness that does not taste like it is only 3 net carbs per serving at all. I ate two and was still down half a pound the next day. I love this way of eating! The macros break down per serving, a serving being one doughnut, is: 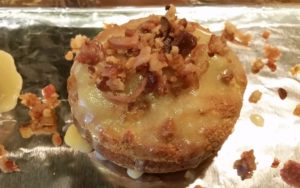 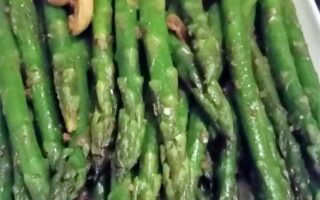 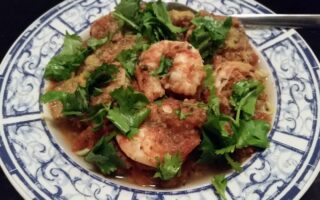 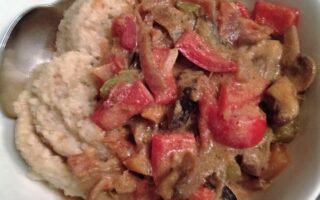